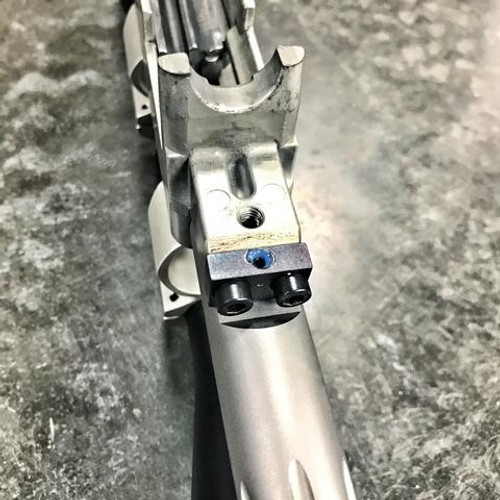 On a lot of 10/22's the barrel does not fit very tightly in the receiver. Not exactly surprising since they just slide into a hole, and to say they are mass-produced is an understatement. The issue is that the factory V-block which holds the barrel in, actually pulls the muzzle of the barrel down. How much depends on how loose your barrel/receiver fit is.

Surprisingly, this doesn't effect accuracy all that much, and especially if you are using iron sights, you may never notice. But if you're running a scope, it's not at all uncommon to run out of elevation adjustment. Basically, the top of the receiver may be pointing at the target, but the barrel is pointing out the ground in front of the target. Your scope can accommodate for that, but only up to a point. This problem becomes even more pronounced when you are trying to reach out at distance.

Even if you have enough physical elevation, you may run into another problem. At range you may need to dial to accommodate for wind, or maybe your scope and barrel aren't exactly aligned for windage either. As the crosshairs approach the top or bottom of the scope tube, they loose windage adjustment because the tube is physically getting narrower. So as you're trying to force the crosshairs up or down at extremes, the mechanism may physically run into the scope tube, pushing the crosshairs in two directions at once, or damaging the mechanism. This phenomenon is the reason for 30mm and 34mm tubes, NOT increased light transmission.

This block solves all those problems by helping to press the barrel straight back rather than pulling it down, and adding a set screw to provide upward pressure on the barrel. We recently had one where installing this barrel block caused it to bore site roughly 4" higher at maybe 10yds. That is a significant difference!