Temporarily not available while we are moving!
( saved )
No reviews yet Write a Review 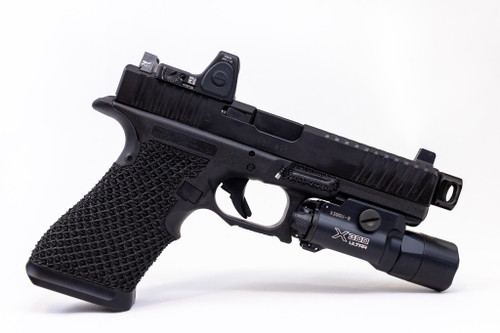 These slide serrations were originally intended for someone running a red dot, and was ‘loosing’ a lot of the realestate that they normally had for manipulation at the rear of the slide. That said, they work great even if you are not running a red dot, and look pretty cool too. As with all of our serrations, they are not sharp (in that, they will not cut your hands) but they are deep and square so they will give you a ton of traction. They aren’t saw tooth edged, but they have the same concept as a dirt bike motorcycle tire; deep aggressive tread that digs in even if it’s wet or slippery, but without cutting.

The upgraded slide work has a panel of serrations (the exact number varies depending on specific model of slide) but they will typically run from the rear of the Glock logo almost to the front of the ejection port area. Obviously if you’re running a G26 there will be fewer serrations than on a G34, and for that matter on some slides like the G40 or G17L, we may not fill that entire space.

After that, we will cut what we call ‘Corner Cuts’ which are the short cuts across the corners of the slide. These work great to help with press checks and general manipulation.  This just looks cool and gives the pistol a stylish look. (No front serration models) If we do not a have model of your slide we will contact you. We can do it, but there will be an additional fee.