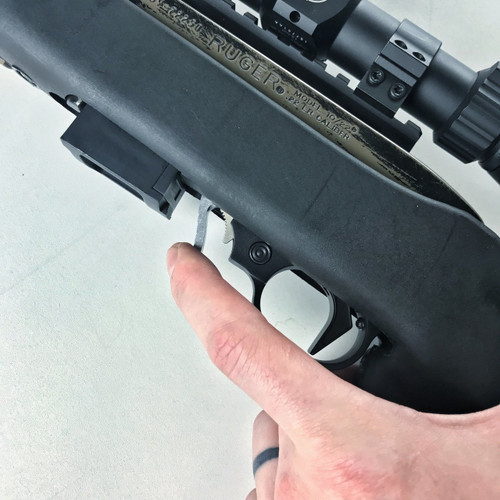 (I feel like it should be pretty clear, but just to be safe, this product will NOT lock the bolt open on an empty magazine. There is one product out there which does that, but it's fairly expensive and requires modified magazines. Not that any of that is a bad thing, but this product is not that one...)

So you will still need to lock the action open manually, just like you've always done. This product however has a nicely extended and serrated surface to make that job easier. Once you've got it locked open, no more wrestling with the firearm to drop the bolt, simply pull back on the charging handle slightly, and let it go. That's it.

Working the factory release isn't a huge issue, with a little practice, but if you like to have the bolt open on empty when carrying/shipping the firearm (we do), or if you shoot at a range which requires the bolt to be open between strings, the factory part gets old in a hurry. We agree that this product is a little bit like re-inventing the wheel, but hey, when Chip Foose designs a wheel, no one argues...

A couple of notes about this part:

1. If you're buying trigger work from us already, we will modify the factory part to behave the same as this one, so from a functional standpoint, you can save your money. But our personal guns rock these parts, because they are awesome. We won't judge you for doing the same.

2. If you clean the barrel of your firearm with a rigid rod from the muzzle, you can run the risk of the rod popping through the chamber, and bumping the bolt, which will release it and cause the bolt to drop on the cleaning rod. With practice this happens less often, and it doesn't hurt anything when it does.

3. If you are buying one of our Magazine Pull Releases, this bolt release comes with it. That is NOT true of any other magazine releases that we carry.

4. We do not guaranty that this release will work with any other aftermarket magazine releases, other than the ones we carry.  There's a lot of designs out there, and some of them are quite bad. It's a little complicate, but a lot of them won't work with a modified factory release either. If you have any issues let us know, and we will work on creating a compatibility chart as issues arrive. So far, none yet. But just be aware that if you have an aftermarket magazine release, and you buy this part, it may not work without some tinkering on the magazine release.